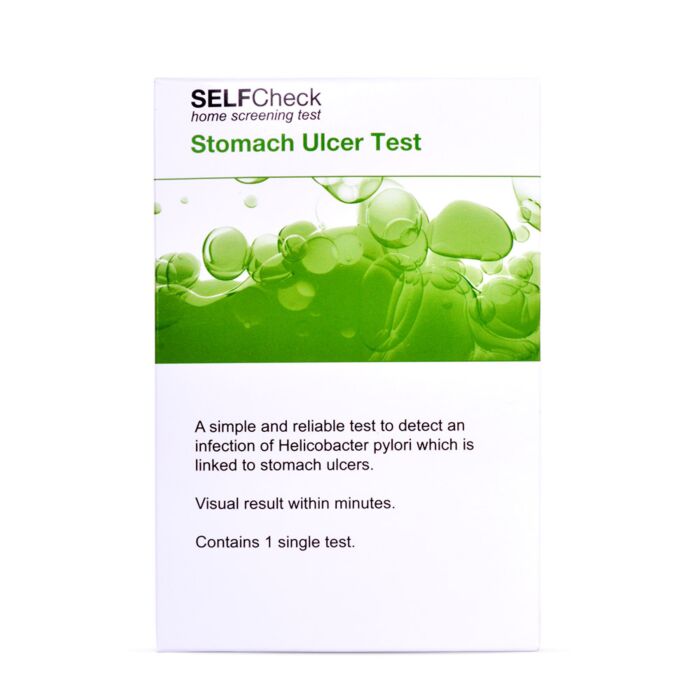 Could you have a stomach ulcer? Use this h pylori home test and worry no more!

This home use stomach ulcer test kit looks for the bug Helicobacter Pylori This bacteria is a major cause of stomach ulcers and can also lead to stomach cancer. If you suspect you may have an ulcer or have stomach ulcer symptoms this test is simple and fast. If positive, a simple treatment of antibiotics from your GP will eradicate this bug and stop an ulcer (or worse) developing.

This test has been extensively evaluated by the largest European screening study (150,000 people over a period of 5 years).

Why test for stomach ulcer?

It is estimated that half of the world's population is infected with Helicobacter pylori. Infection with this bacterium can cause stomach ulcer or gastritis. Untreated infections can put you at an increased risk of developing ulcers or stomach cancer.

Who is it for?

Everyone. Infection occurs in both men and women of any age, including children.

Helicobactor pylori is a bacterium that enters the stomach in food and drink, but does not get destroyed by the acid there. Around 30-40% of us are thought to be infected with it, and it can cause inflammation of the stomach lining, known as gastritis. A small number of cases can progress to stomach cancer. But now we know that H. pylori is one of the guilty parties, many of these cancers could be prevented with simple antibiotic treatment.

How often should this test be performed?

As often as you wish. However, if you have been treatment for infection with H. pylori, positive results may appear up to 12 months after the infection has been cleared.

What is the interpretation of results?

Results should not be interpreted after 20 minutes.

What should you do if the result is positive?

You should consult your doctor for further examination, diagnosis and potential treatment. Do not make any medical decisions without consulting your doctor. Not being infected with H. pylori does not necessarily mean that you cannot get a stomach ulcer for another reason.

Care Diagnostica Viola Vaginal pH Test Kit (2 in pack)
£6.99
Add to Wishlist
Wishlist
Last Added Items
Go to Wishlist
You have no items in your wishlist.