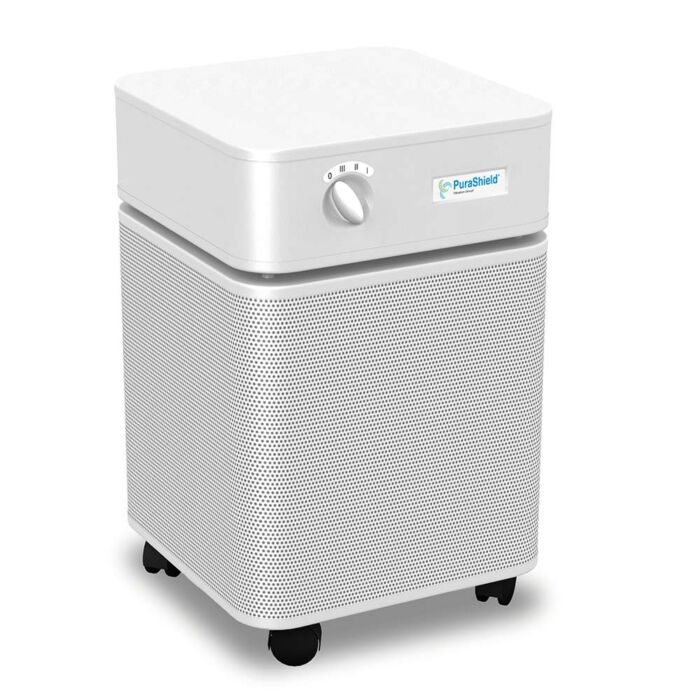 £1,249.99 with FREE UK Delivery
In stock
Only 2 left
SKU
13762
Want it delivered by Monday, 19th Apr? Order within and choose Special Delivery at the checkout.
Key Features
Brand
PuraShield
Description

The air inside our homes and workspaces can be up to 5 times more polluted than that outside. Reduce the risk of health complications & improve air quality with the PuraShield™ 500

We all understand the negative health implications of air pollution, but did you know that the air inside our homes and workspaces can be up to 5 times more polluted than the air outside? Poor ventilation, mould, mildew, allergens, and household cleaning products are just some of the causes. In addition, bacteria and viruses thrive in an indoor environment. Indeed, there can be over 900 toxins damaging our quality of air and, when you consider we breathe more than 20,000 times a day, this is quite a worrying statistic. Even more so as we increasingly spend more and more time inside!

Not only can gasses, chemicals and other pollutants lead to headaches, eye irritation, allergies, and fatigue, but they may also result in more serious health complications. Exposure to toxins in the air can increase heart rate and blood pressure, increase the risk of cardiovascular disease (CVD), lead to respiratory conditions (such as asthma and COPD) and there is increasing evidence linking it to dementia. Each year, emergency services see more than 120 additional cardiac arrests, more than 230 additional strokes, and nearly 200 more people requiring hospital treatment on days of high pollution compared with the average on days of lower pollution. This demonstrates just how much of an impact the quality of air we breathe has. In addition, research has shown that pollution heightens the risk of common mental health disorders. Indeed, scientists have found that people living in places with higher levels of particulate pollutions were twice as likely to experience mental health issues than those living in less polluted areas. The researchers acknowledged that other factors contributed to mental health, such as genetics and childhood experiences, but added that, unlike these, air pollution is preventable.

Although breathing oxygen rich, toxin-free air is vital for everyone to ensure optimum health and well-being, it absolutely critical for some, for example, asthma sufferers. In fact, two thirds of people with asthma attest that poor air quality exasperates their condition, putting them at greater risk of an attack. Those that are particularly at risk when the quality of air is poor include:

4 layers of filtration to remove 99.99% of aerosols, including those carrying COVID-19! Protect your family or your staff members, with the PuraShield™ 500

The PuraShield™ 500 is an air scrubbing device that has a 4-layer filtering system consisting of a pre-filter, a patented molecular filtration media, a PuraWand filter layer and a HEPA grade final filter. Expertly engineered to remove a large breadth of gaseous, microbial, and inorganic particles that compromise indoor air pollution, this ergonomic air scrubber removes 99.99% of aerosols (including dust, fog, mist, steam and more) carrying viruses. Evidence shows that COVID-19 is one of the viruses transmitted via aerosols, which means the PuraShield™ 500 can protect you, your family, or your staff members against the illness!

Facilitating 6+ air changes per hour, based on a 500ft squared room with an 8ft high ceiling, this industrial-strength air purifier is not only suitable for use in the home, it is ideal for use in an open plan workspace/warehouse. The perfect way to transition between homeworking and welcoming more staff back into the office or increasing the safety for keyworkers and those that cannot work from home, the PuraShield™ 500 is a highly efficient air filtration system with low power consumption. In addition, it is the only air scrubbing device that uses patented molecular filtration and has undergone third party testing to validate its performance.

Capturing particulates as small as <0.3 microns, the PuraShield™ 500 boasts 4 filters for optimum efficacy. The first is a pre-filter, which captures dust, pollen, and other large particulate matters. Next is the PuraWard filter, which is made from high efficiency fibre embedded with a proprietary technology to remove microbial contaminants. This filter protects against viruses, bacteria and mould using copper and silver ions. The third filter the air passes through is a patented molecular filtration media that removes aerosols carrying viruses, safely oxidising the molecules, whilst also removing toxic and harmful gases. It consists of Purafil’s patented, spherical, porous pellets that remove gaseous pollutants from the air through a unique chemical process, known as chemisorption. During chemisorption, the media converts harmful gases from the air into harmless materials that are trapped inside the pellet. Providing the very highest oxidisation potential, it will oxidise a surface area approximately the size of 419 football fields. Finally, there is a HEPA (high efficiency particulate air) filter, which traps harmful particulate matter, including dust mites, pollen, pet dander, mould spores and other allergens.

The PuraShield™ 500 is ergonomic in design and is incredibly simple to use. Boasting durable, adhesive free construction with highly aerodynamic air foil screens, easy access sampling pots, and patented Purafil technology, it even features wheels for portability and has a long 4.5ft power cord. With a 6-month filter life and complete with a 2-year warranty, you can rest assured that this premium air scrubber has been constructed to the finest standard of quality. Unlike other air cleaning devices, the PuraShield™ 500 has a greater capacity to treat a larger air volume and supply more clean air over a shorter time span. Because it has been evaluated directly against airborne microbes at independent laboratories, the removal effect of the individual filtration layers as well as the entire unit has been proven to work.

In addition to removing harmful particles and toxins from the air, the PuraShield™ 500 will also eliminate the odours associated with them. Many people mask indoor odours by using aerosols, plug-ins, or scented candles. However, these pleasant aromas may temporarily overpower existing smells, but it won’t last as they don’t eliminate the root cause. Indeed, sprays and fresheners only coat airborne pollutants in even more chemicals, which we then inhale. In fact, 86% of air fresheners tested by the NRDC contained cancer-causing phthalates; even those marketed as ‘all-natural’ and ‘unscented’. Additionally, some scented candles contain cancer causing chemicals, such as benzene and cadmium, and may even contain the same hydrocarbons found in cigarettes and car exhaust fumes.

Purifil is the leading global provider of molecular air filtration with over 47 years of experience and expertise. Developing a highly effective range of products that remove harmful and unpleasant particles, gases, odours, bacteria, and viruses from the environment, the PuraShield™ 500 is one of their bestselling units!