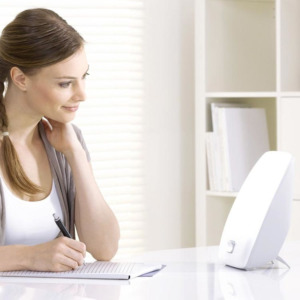 Posted in: Living Aids, Health
When the clocks go back at the end of October around three million people in the UK will begin our annual battle with the ‘winter blues’, but did you know there is actually a medical condition known as SAD that is the reason you feel worse over winter.

Is there anything less appealing than getting out your warm cosy bed in a morning when it’s freezing cold, pouring down with rain and still pitch black and an afternoon power nap is certainly a more attractive prospect than a healthy walk outside to give you a perk up. Naughty foods such as chocolate and biscuits become almost irresistible and you can wave good bye to your summer body you worked so hard to achieve as the pounds pile back on until the clocks go forward again in spring.

For hundreds of years we have been aware of the impact the seasons have on our moods. But it wasn't until 1984 that US psychiatrist Dr Norman Rosenthal, himself a sufferer of seasonal depression, identified what he called seasonal affective disorder, or SAD as it is more commonly known. According to Rosenthal it is a form of depression due to a lack of sunlight. Most of us probably experience a touch of the blues come wintertime, but for between 2.4 per cent and 3.5 per cent of people symptoms can be more severe.

Lack of Light in

Although we know that SAD is triggered by a lack of sunlight we still don’t know exactly what the specific cause of it is. One longstanding theory is that it is due to a shift in the body's biorhythms, or body clock as its more commonly known, caused by an excess of the brain hormone melatonin. Melatonin is a hormone that the body produces to regulate our body, it slows down many of the bodies process to allow our bodies to rest and recover. Melatonin is produced during darkness and levels drop again when the sun rises. During in the winter months there is a lot less day light which causes our brains melatonin production to spike which can make you feel very fatigued, down in the dumps and just generally a bit rubbish. Night workers and people with jet lag also report similar symptoms, although in the case of jet lag only for a short time. However, melatonin isn't the only factor says Professor Anne Farmer, honorary consultant psychiatrist, who treats SAD patients at her clinic at London's Maudsley Hospital. Cortisol production has been found to be increased in people that suffer from SAD. Cortisol is the hormone your brain produces in to help deal with stressful situations, however when the levels are too high for too long (like in somebody suffering from SAD) it can lead to weight gain, tiredness, impaired brain function, high blood pressure and more.

So how should SAD be treated? Although you may think you are always in well-lit rooms, the light given off by standard bulbs isn’t powerful enough to make up for the lack of sunlight in your life. The power of light is measured in lux, to put into context how weak the light from a normal bulb is, direct sunlight can be anywhere between 32,000 to 100,000 lux with ambient daylight been between 10,000 and 25,000 lux but an office is usually only around 500 lux and your home between 50 to 100 lux. Bright light therapy is the solution, it utilises powerful lights that are up to 10,000 lux to give you a dose of light, similar to sunlight, that reduces your melatonin levels and increases the production serotonin, the ‘feel good’ hormone, this helps you feel happier and more awake.
27 October 2017
464 view(s)
Categories
Tags were not found